The past weekend was fantastic. I packed up the kids, the cat and the dog and we headed down to Savannah to spend Thanksgiving weekend with my eldest baby and his wife. As soon as we got there, Jacks took their little black kitten under his wing to teach him how to be a real cat.  Needless to say, Jacks was a dick the entire time we were down there.  The happy couple made a delicious Thanksgiving meal with plenty of food to make sure all of us were stuffed by the end and still have leftovers.

(Aren’t they a gorgeous couple?)

My baby’s first tattoo (there is still some work to do but it is amazing as it is) The first image is showing the tattoo being done and the second is how it looks so far: 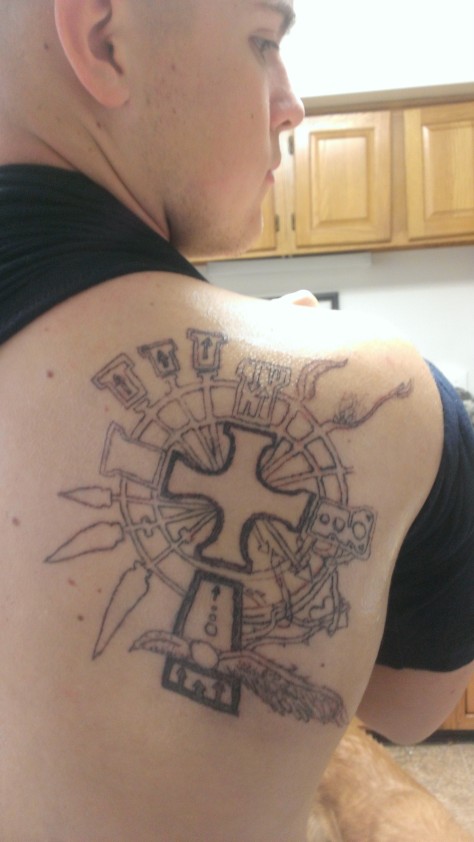 A cleaner image of the tattoo

And then on Saturday we went to the beach, where you are not allowed to fish for sharks from the pier. Bummer. (Eek! Sharks?!) While we were there, dolphins were swimming very close to the shore, flocks of birds were everywhere, and it was just a really nice excursion with the kiddos.  It started off with beautiful blue skies, though it was a bit chilly, and proceeded to get cloudier as the afternoon turned to evening, which allowed for some lush colors to photograph. Click on an image to go to the gallery.

Leaving the middlest son behind to hang with his brother and sister-in-law, the daughter and I (and the animals) headed home on Monday and as soon as we got back, Jacks was once again the loving, slightly needy cat he’s come to be. Strange cat. Lucy was simply happy to be home.