If you click on the link, it should take you to the process of making two cheetahs from Lion King for a local school production. I don’t know if they were even used but the darling daughter and I had a lot of fun figuring out how to make them and then making them. The faces are particularly precious – they have so much personality! Darling daughter painted them and she did an amazing job!

We each sculpted a face and then covered them in plaster wraps (the kind used to wrap broken bones.) And then we set the faces on the bodies that were made out of chicken wire, wood dowels, shop towels, poster board, as well as plaster wraps.  Check out the pictures if you’re interested in seeing how we made it happen. 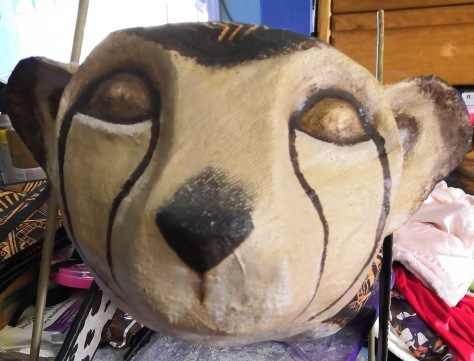 If you haven’t noticed, it has been QUITE some time since I last posted. I have three years of dance recital videos to post as well as all of the projects I’ve been working on, none of which involve writing. Over the next couple of weeks, I hope to have those up for anyone interested. Since I am expanding this site to include non-writing projects, I’ll be inviting my darling daughter to post some of her projects and such. She has grown into such a lovely, talented young lady! If I follow through, you’ll be able to see how much she has grown as a person and an artist. Our current projects include the darling daughter making a HUGE book for the Nutcracker production that she is in, making a Mother Ginger costume and several other costumes for same production, DD cutting music for her studio (dances are generally 2 1/2 minutes to 3 minutes) which she does it seamlessly, dancing, dancing, and more dancing, spending time with the grands, of which there are now two, and trying to keep on top of everything. 😀 Looking forward to catching up! Hopefully it’s not another (mumble mumble mumble) years before I post again!